Posted on February 22, 2016 by jedwardnajera

There is an old country song called “I’m my Own Grandpa.” It is silly and funny and easy to find on YouTube.  Look it up some time when you feel like a little nonsense. 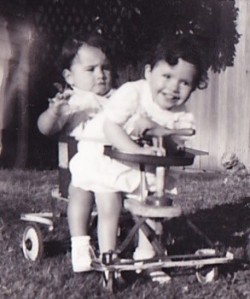 This is a picture of my sister Teresa. This was probably taken around 1944.  That’s Richard Henry Olivas hanging on for dear life right behind her. They were born about the same time in Ventura County, California.  Richard was our first cousin. 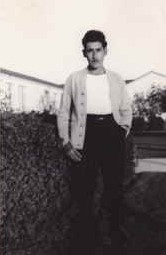 This is Richard’s father, Frank Olivas, my dad’s brother.

So, why is my last name Nájera and not Olivas?  My grandfather, Manuel Maria Nájera died in 1919. He left his wife, my grandmother, a widow. 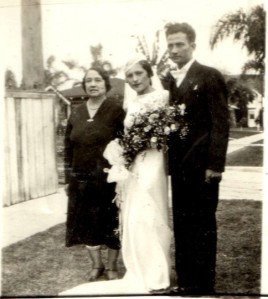 That’s my mom and dad on their wedding day. They are standing next to my grandmother. The year was 1936.

I don’t know how or why my grandmother brought her family to Oxnard, CA. I do not know who to ask. It’s on my list. She met and married Juan Maria Olivas. As part of the marriage he adopted all of my grandmother’s kids. He even gave them his last name.  Two brothers followed, Frank and Henry Olivas.

School records show my father as Charlie Olivas. I think eventually he resented having his real name taken away from him, so he took it back by the time he finished high school.

That handsome man, posing with his daughter Isabel, is my uncle Rosario Ledesma.  Rosario is my mother’s cousin, from her grandparent’s generation, (2nd cousin). They were part of our family circle, they lived behind us in Cupertino and we saw them every day.

Here is Rosario again. This time he is holding my sister Teresa. That lady on the right is my father’s sister, Natalia. She is holding our cousin Richard.

So, why is my dad’s sister standing with Rosario? He became a widower and eventually they got married.

Rosario was my third cousin, and became my real uncle. His daughter Isabel, my 4th cousin became my 1st cousin.

When I start thinking about this I hear that song rattling around in my head.

I’m my own grandpa.

I am an artist and a Poet. I live the life of a poet. I published several novels. Nena the Fairy and the Iron Rose, Dust of the Moon are among them, available through Amazon Books. I have spent over thirty five years in a classroom. I am now retired from that profession. My father kept a living record of his lifetime as he lived through the Twentieth Century. He was born in 1908 and almost lived long enough to see us enter the new millennium. He entrusted to me nearly 400 pages that he wrote through the years. Now I am continuing the tradition by posting my own stories and misadventures. I am trying to post a new entry or chapter each Friday. Check in on us at least once a week for the latest post.
View all posts by jedwardnajera →
This entry was posted in Ancestry, Uncategorized. Bookmark the permalink.