Barbara Worth by Joseph Najera

Posted on September 9, 2015 by jedwardnajera

One motion picture that my father talked about was called “The Winning of Barbara Worth.” It was originally a novel, by Harold Bell Wright. He lived in the Imperial Valley and wrote this story about the valley’s origins. 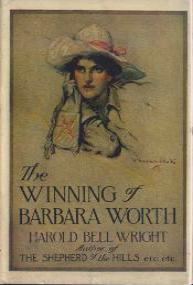 The novel became very popular in the early 1900s and was turned into a silent movie. We had a copy of the book in our house, as I grew older I eventually got around to reading it. I still have that copy.

It told the story of how the Imperial Valley farmlands were developed by the construction of the canals that came from the Colorado River.

The special effects of the movie were primitive and yet are still quite effective. In the story and in real life, the dams and water gates that were built to hold back and control the water were not well built and the water from the Colorado eventually broke through and flooded the lower portions of the Imperial Valley. The flooded area is now known as the Salton Sea.

The movie is available as a DVD. I recommend you look for it. It features Gary Cooper in his first starring role, Ronald Coleman also starred.

For many years there was a world-class hotel in downtown El Centro, where I was born. It was called the Barbara Worth Hotel. Harold Bell Wright often participated in the social events that occurred there. It managed to survive until 1962 when it burned down.

I remember the building when I was very young. I suppose we weren’t world class people. My family never took us inside it.

I am an artist and a Poet. I live the life of a poet. I published several novels. Nena the Fairy and the Iron Rose, Dust of the Moon are among them, available through Amazon Books. I have spent over thirty five years in a classroom. I am now retired from that profession. My father kept a living record of his lifetime as he lived through the Twentieth Century. He was born in 1908 and almost lived long enough to see us enter the new millennium. He entrusted to me nearly 400 pages that he wrote through the years. Now I am continuing the tradition by posting my own stories and misadventures. I am trying to post a new entry or chapter each Friday. Check in on us at least once a week for the latest post.
View all posts by jedwardnajera →
This entry was posted in Family History, Movie History and tagged California, History of Imperial Valley. Bookmark the permalink.