Posted on February 20, 2015 by jedwardnajera 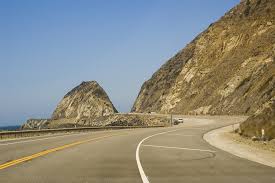 You have seen this place many times, I am sure. Many car commercials show this rock as a shiny new auto drives by. I have seen this rock many times in the movies. Maybe you will recognize it the next time you see it somewhere. This is Point Mugu, California. It is on Highway 1.

South of here are numerous beaches, Malibu and Santa Monica and the L.A Basin. A few miles north is Port Hueneme and Oxnard, and the rest of Ventura County.

I have been there on many family adventures. We have gone there to fish from the surf, dig for clams, and have spent many nights catching grunions. They are a curious fish that come ashore to spawn. We would catch them by the buckets and feast on them. Also, many of my family members would go there for duck hunting. Point Mugu State Park is nearby. It has plenty of camping sites and beach access.

I have memories of my first adventure there. In the near future I will relate that story.

Point Mugu is the home of of the Naval Air Warfare Center Weapons Division (NAWCWD). The map shows this as Naval Base Ventura County. From there they manage the Weapons Division’s sea range. They provide support for guided missiles, tracking, testing, training.

In 2004 President Ronald Reagan breathed his last.  A private service for family members was held in Simi Valley at his Presidential Library. (You can see on the map where that is located.)

After words the presidential library was opened to the public. Over 100,000 people waited in line to pay their respects.

On June 9, 2004 the President was taken by motorcade to Point Mugu Naval Air Station where he was flown to our nation’s capital.

I am an artist and a Poet. I live the life of a poet. I published several novels. Nena the Fairy and the Iron Rose, Dust of the Moon are among them, available through Amazon Books. I have spent over thirty five years in a classroom. I am now retired from that profession. My father kept a living record of his lifetime as he lived through the Twentieth Century. He was born in 1908 and almost lived long enough to see us enter the new millennium. He entrusted to me nearly 400 pages that he wrote through the years. Now I am continuing the tradition by posting my own stories and misadventures. I am trying to post a new entry or chapter each Friday. Check in on us at least once a week for the latest post.
View all posts by jedwardnajera →
This entry was posted in Family History and tagged California, History of Oxnard, Oxnard, Ronald Reagan. Bookmark the permalink.