Posted on January 9, 2015 by jedwardnajera

(Dear reader: This is a rewrite of a post titled “Echevarria”.  I combined two of Don Carlos’ stories since they were about the same subject.)

I think that I better confess. The heat this summer here in Mexicali hit me pretty hard. It didn’t bother me when I was younger. But lately there have been many days when the temperature gets over 110° and stays there. I am getting close to eighty years old and this summer heat is not fun anymore. In my house I have a small fan to cool me off, and since I live alone, don’t tell anyone, I walk around my BVD’s.

I got to the point where I could not take any more of this heat. I started getting red polka dots on my arms and belly. It was heat rash, when I washed my arms in cool water it cleared up. 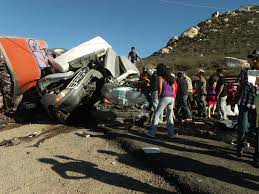 I decided to go up the Rumorosa. It is a place, a mountain range, and the name of the highway that goes up there. The highway up there is one of the most dangerous in the world. I pulled over one time and tried to count the trucks, buses, and autos that went down the cliff. I stopped counting after a hundred, and that was just from one spot.

Up on the summit to the west of Mexicali the air is so clean and cool that my lungs felt clean. I felt so good up there that I decided to move here. It is very rustic here that I feel like a pioneer. There were pine trees all around. It smelled great. It took a while, but eventually I found a place that a family with six kids started to build. Two rooms and a bath room were all I needed. It has an old fashioned well, a septic tank and a fence. It was all that I needed

There is a paved road along the side of it, and it was about three or four blocks from the Bus stop to Tecate and Tijuana. There is a grocery store at the bus stop. A taco joint is also near by. I had everything I needed.

This is a picture of my house in Echavarria.

It is a small settlement outside of Tecate, Mexico. It is near the border, high on the mountain range between Mexicali and the Pacific Ocean.

I couldn’t warm myself up so I left the house and drove into Tecate to have breakfast.   It rained all the way on the icy road.   I thought that I would check out a joint that I had not visited.

I stopped at a new joint along the way. It looked like an old fashioned “greasy spoon” but I figured that they couldn’t ruin a cup of coffee so I gave it a chance. The pancakes were good!     Old widows around here go to work in these joints and the food tastes like home cooking.

Here’s a picture of my boy, Carlos. Most people called him “Boy”.  He lives in Houston, Texas where he works as a librarian. We are sitting in front of my house. That was a nice day last spring when he came for a visit.

Today, however, it is snowing. Yesterday I went out to the well and tried to get water. The bucket was heavy. It felt like it was stuck on something. I tugged and tugged until I heard something crack and I brought up the bucket filled to the brim with rock solid ice.  It is very cold and windy here on top of the mountain. All I have to warm up the house is a little heater that plugs into the wall.

I became bored sitting in the house shivering after I came from Tecate so I went to the Rumorosa.  It’s a settlement to the east near the summit.  There is a joint there that serves beef soup just like my mama used to make, made with all the vegetables from the garden. It started to snow on the way over there and the snow stacked up around the windshield making it look like it had a white frame all around. The soup was worth the trip.

When I got up this morning everything was covered with snow.     I was drinking coffee and looking out of the window when the snow started to fall again.   I said that the snow started to fall but it really did not do that.    The wind was blowing so hard (about 80 to 90 miles an hour) that the snowflakes were floating horizontally and they stopped whenever they collided with something.

I’m going back to Mexicali.

I am an artist and a Poet. I live the life of a poet. I published several novels. Nena the Fairy and the Iron Rose, Dust of the Moon are among them, available through Amazon Books. I have spent over thirty five years in a classroom. I am now retired from that profession. My father kept a living record of his lifetime as he lived through the Twentieth Century. He was born in 1908 and almost lived long enough to see us enter the new millennium. He entrusted to me nearly 400 pages that he wrote through the years. Now I am continuing the tradition by posting my own stories and misadventures. I am trying to post a new entry or chapter each Friday. Check in on us at least once a week for the latest post.
View all posts by jedwardnajera →
This entry was posted in Family History, growing old and tagged Living alone, Mexicali. Bookmark the permalink.